Heimat 3 premiered in Germany in the Prinzregententheater. See the pictures Thomas Hönemann took of the presence of all three webmasters of Heimat-websites.

In the book WORLD CINEMA: Diary of a Day, A Celebration of the Centenary of Cinema (in conjunction with the British Film Institute), edited by Peter Cowie there's an entry by Edgar Reitz on page 391. On June 10, 1993 Cowie tracked down directors, actors, editors, etc. around the world and asked them what they were doing. "I have just experienced a little miracle with the work in Italy. Since it could not be sold to television there, Mikado FIlm has been able to experiment with a cinema run. The results are sensational. They are showing the 13 parts there in an ordinary cinemas and have one part running for a week, with four screenings a day, therefore 28 times per week. Then the second part follows for a week, and so on, until thirteen weeks later, that's to say a quarter of a year, the film reaches its conclusion. The performances in Rome and Milan were all sold out, and the Italian press are asking what could have brought on this intoxication. Social habits changed. Members of the audience met one another once a week for months at a film, became friends, went to parties together afterwards, and achieved a level of experience which they could compare to nothing else. More than 150,000 tickets were sold in one cinema alone in Rome for DZH. The distributor reports over a million visitors. An isolated case? A portent of new possibilities for the future?"

In Trondheim, where the Trondheim Film Klub organised a screening which Thomas Dunker attended. 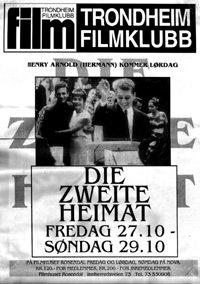 At the Harvard Film Archive Heimat in four screenings:


Harvard usually obtains 35mm prints when available, however the program annoucement fails to indicate whether this will be 35mm, 16 or video projection. Location: The Carpenter Center for the Visual Arts, 24 Quincy Street, Cambridge, Massachusetts 02138, Phone: 617-495-4700
This is part of a larger series "Reinventing Germany" which includes Fassbinder's "Lili Marleen", Helma Sanders-Brahm's "Germany, Pale Mother", and "Schindler's List."

In Italy, in Bologna, september 1996 in Cinema Lumiere

In the United States it has been screened by the Goethe Institute in Boston. (A new screening is being planned by Andrew Blom in Chicago some time in 1997 or 1998 . Write him if you're interested to attend it and/or help to realize it.

In the Netherlands, both DIE HEIMAT and DIE ZWEITE HEIMAT have been shown in 7 theatres in (subtitled in English).


The schedule of the Heimat screening in Kriterion for example:


Die Zweite Heimat has been shown on several filmfestivals.

The DZH website is a joint effort by ReindeR Rustema, Alan Andres and many others. Back to the main page.